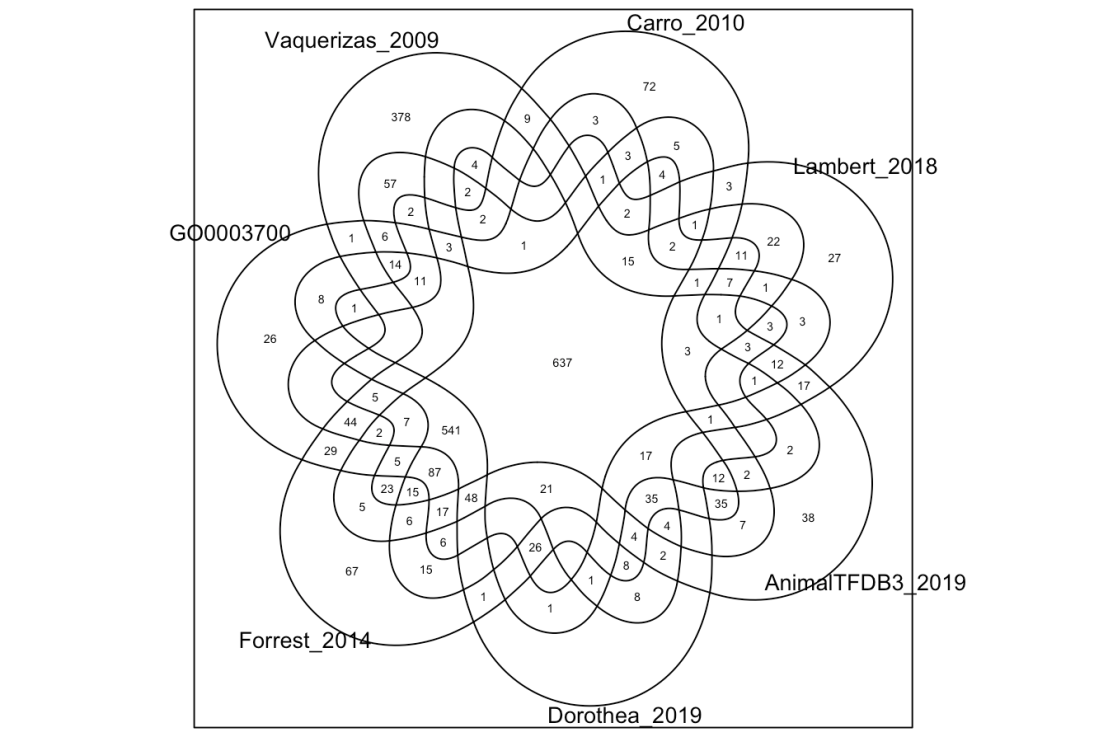 Defining a list of “transcription factors” is not as straightforward as one could imagine. If we browse the literature we can actually find different lists of TFs out there, and they do not always overlap. In this post, I compared a few of the main ones (most-cited and most-used) out there.

What is a Transcription Factor (TF)?

First of all, let’s start with the basics. What is a TF? TFs are proteins that regulate gene activity by binding to specific DNA sequences termed motifs or regulatory elements (Ptashne and Gann, 1997, Lambert et al., 2018). These DNA-binding sequences can be found proximal to the target genes, such as upstream (promoters), downstream, or even in intronic regions, or more distant to the target genes (e.g. enhancers or silencers). A defining feature of TFs is that they contain at least one specific domain that can bind DNA, which is termed a DNA-binding domain (DBD). TFs use a variety of DNA-binding structural motifs to recognize their target DNA sequences, these include homeodomain (HD), helix-turn-helix (HTH) and high-mobility group box (HMG) (Mistis et al., 2020). Such DBDs can be used to classify TFs. Several other proteins participate in the process of regulation of gene expression (coactivators, chromatin remodelers, histone acetyltransferases, histone deacetylases, kinases, and methylases). These other proteins are also essential to gene regulation, but lack DNA-binding domains, and therefore are not considered TFs (Brivanlou and Darnell, 2002).

The regulation of gene transcription orchestrated by complex transcriptional regulatory networks is a fundamental part of both tissue-specific gene expression and gene activity in response to stimuli (Latchman 1997, Wilkinson et al., 2017). Thus, the analysis of TF-networks is a central issue in bioinformatics and systems biology.

How many TFs exist?

When I started working in the inference of TF-networks one of the first issues I faced was simply the annotation of TFs themselves. Is this protein a TF? Or a co-factor? Or is it another kind of transcriptional regulator (that is not a TF)? Coming up with a list of TFs is still not that trivial.

So, I started by collecting the lists of Human TFs as annotated in different papers or databases, I selected the ones I think are amongst the most commonly used and mentioned:

Get all TF lists

Some TFs appear in only one list, others in several lists.
Luckily venn library allows us to plot up to 7 lists. The plot is not very informative because there are so many numbers and combinations to consider, but here it goes:

The UpSet plot can show a better overview of how lists of TFs overlap. The first two bigger bars tell us that around 600+ TFs appear in all 7 lists, and another group just below 600 appears in all 6 lists except Carro et al., 2010. The larger bar near the right end side of the plot tells us that there is a group of about ~380 TFs that appear solely in Vaquerizas et al., 2009 list.

The overlap of the TF lists can also be conveniently visualized using a Jaccard index. Seems like the list of TFs from Carro et al., 2010 and Vaquerizas et al 2009 are the ones most dissimilar:

Having realised that there are a few TFs that appear only in 1 of the 7 TF lists, I felt compelled into looking at them in more detail. Are those totally nonsensical?

There are 608 TFs that appear solely in one TF list, and most of these come from Vaquerizas et al., 2009:

PANTHER.db is a protein database with proteins annotated with Gene Ontology terms and organised into pathways and classes (See the 2013 paper in NAR). I really like to use PANTHER.db protein classes to have a general idea of the protein classes that exist in my dataset. I had to do this step manually, but if anyone knows how to get this informatically directly in R – please let me know!

So, first, I save the list of genes on interest (those appearing solely in 1 TF list) and looked at them in the Panther database. HGNC IDs are a pretty robust way to map IDs and retrieve data from the Panther Database

Then, I enter tthis list of HGNC symbols into PANTHER.db. I select the organism: “Homo Sapiens” and then “Functional classification viewed in gene list”. A table with multiple annotations per gene appears. You can download it by clicking “Send the list to” –> “File”. 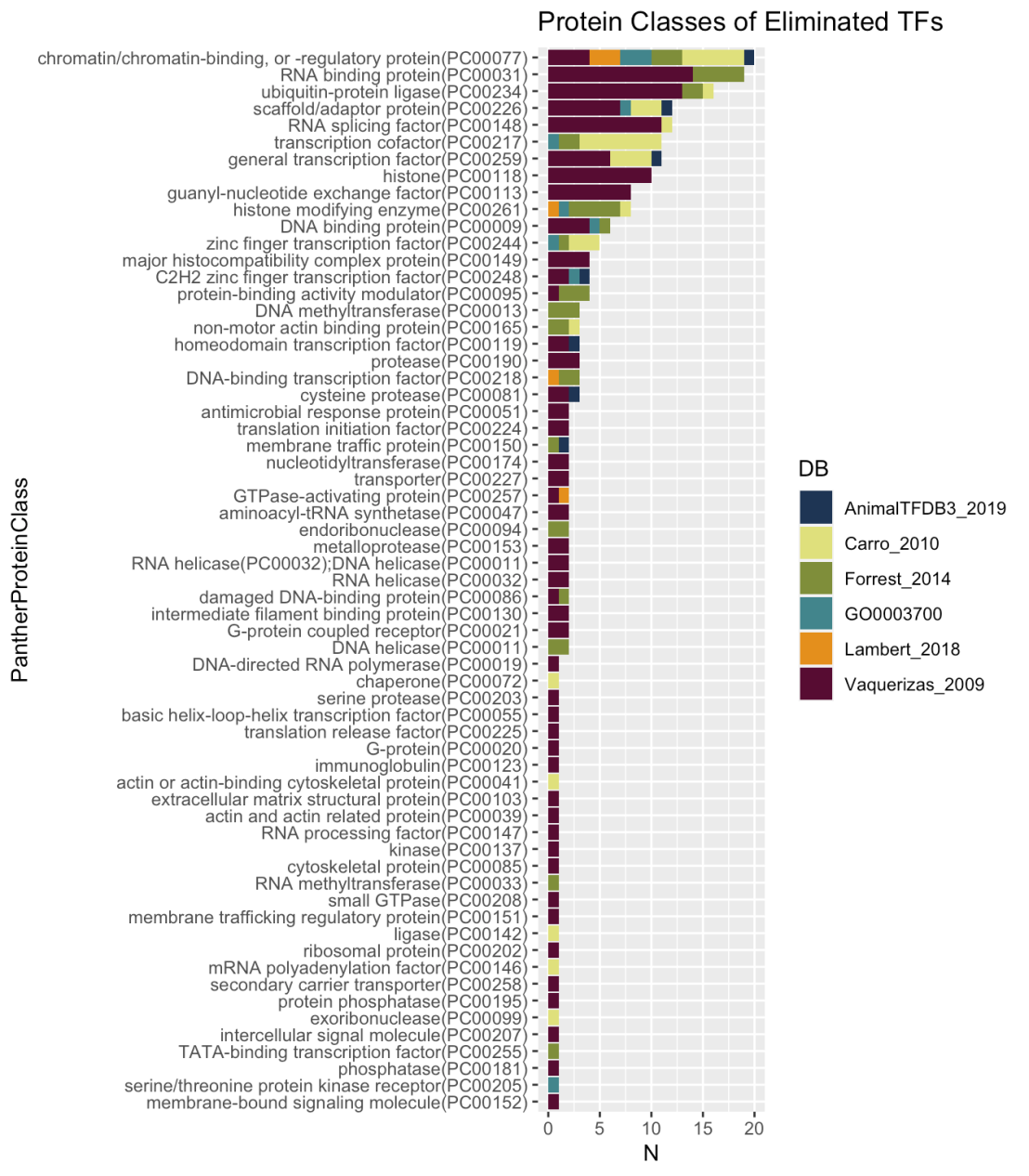 Lets look at a few classes in detail:

How to come up with a reliable list of TFs?

Here we can continue the manual curation of the list of TFs a bit further, and really examine all the inconsistent ones one by one. But I guess, as a quick decision rule, we can decide to trust any protein that appears in at least 2 out of the 7 lists considered. This rule leads to a list of 1924 TFs.

I will get back to this to hopefully do something useful with it.
In the meantime, I made the list available in this link, I hope it can be useful to someone else!

2 thoughts on “Where to find a comprehensive list of potential human transcription factors?”

Reviews and commentary on computational biology by Lior Pachter

In between lines of code

The flipside of the A-side: after-hour ramblings on life, the universe and everything